Racer for a day – scratching at TCR No.5 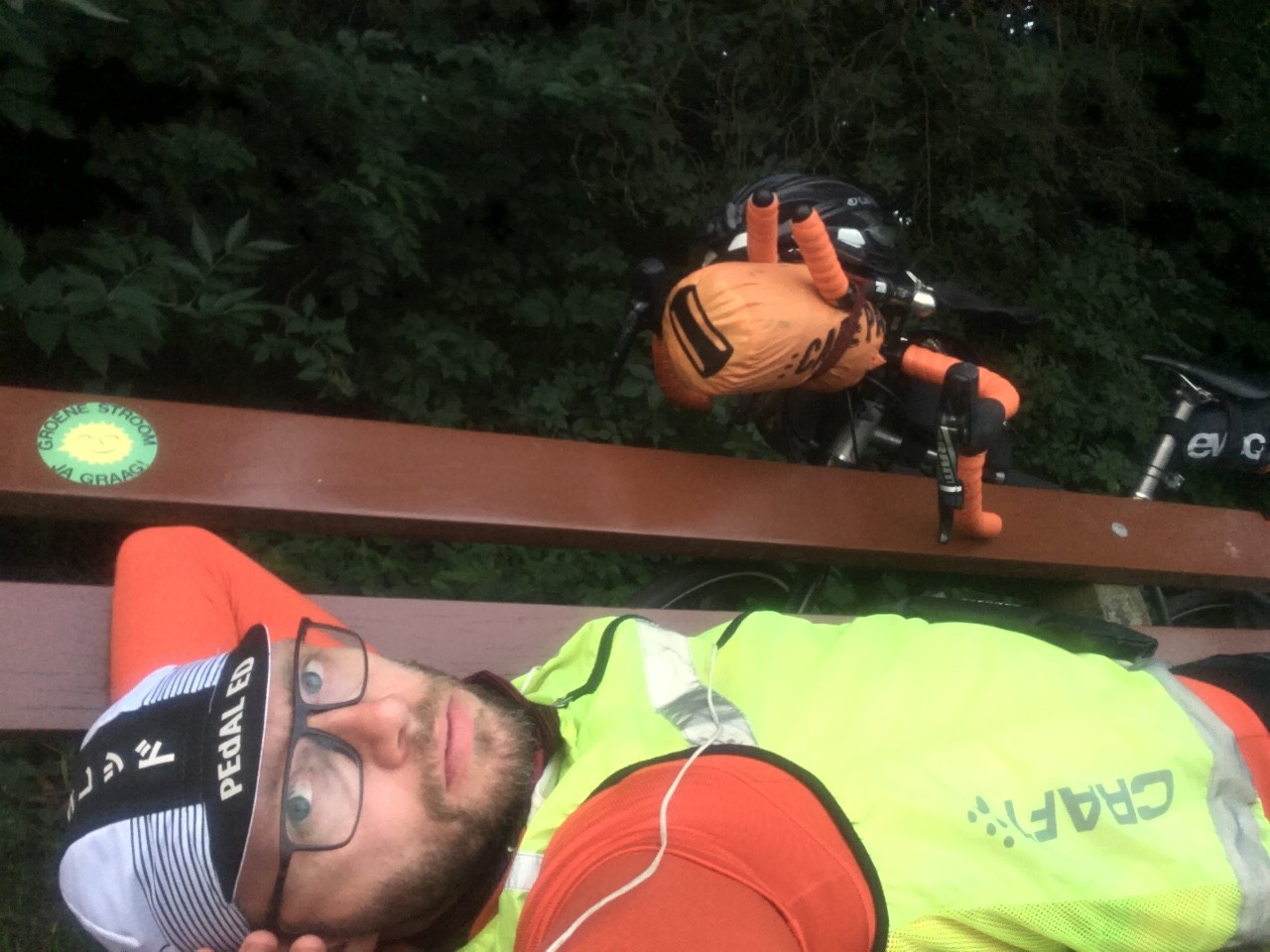 It has now been a month since I scratched from the Transcontinental Race on day 3, having lost my motivation after the tragic death of Frank Simons, and I am still not sure how that happened. Or what that means – if it means anything at all? I have given it time, I have been back on the bike, I have talked about it with other riders – but I still have not come to any kind of conclusion. Maybe writing about it will help?? So without knowing where this text will lead to, here is my (very) brief TCR experience…

It is no secret that I had my doubts leading up to the start, and having to drive up to Belgium instead of riding did not really help either. But once I got to Geraardsbergen on Friday evening the race atmosphere began to take over: all the other unmistakable racers with their fully loaded rigs, the occasional ultra cycling legend, and excited locals: the town was abuzz with a pre race excitement that was contagious. This is really happening, I am about to ride across Europe!

The Saturday was even more so, excitement building up. And at the same time doubts diminished. The bike was packed, my gear was what it was – worrying now was not going to help. And the day flew by quickly – my planned 3 hours of sleep in the afternoon turned out to be a 30 minute nap, but better than nothing. And so, after a solemn minute of silence and a raucous minute of noise for Mike and an emotional good bye from Tina I found myself setting of into the night, together with about 300 other racers.

Setting out all at once meant the first few kilometers of the race had a sense of togetherness that you usually do not get (nor expect) on the TCR, feeling more like a local club ride when I found myself rolling in a group of 30 or so. But it sure ended quickly enough when I took a left turn while everyone else went straight. And that was it for company – except for one very brief meeting around midnight and a headlight far off in the distance that was all I saw of any other rider that night.

The night was uneventful in the best of terms. The weather was great, I was happily riding along on small roads, only seeing a handful of cars and was able to refuel at a gas station at just the right moment. I wasn’t tired, and sunrise saw me powernapping for 5 minutes in The Netherlands, without any sign of having crossed a border (political side note: this is what Europe is about!!).

What surprised me when the day went on was the mindset I was riding in. With all the caveats I had given myself that “I will not be racing the TCR” I was, in fact, racing it! Not against the other riders or for the fastest time possible – but against myself on my set route. Occasionally a rider would pass me on the road while I took the bike path, or I overtook someone twice, having “lost” time because I had chosen a smaller and hillier route instead of the busy main road. And that didn’t bother me at all, I wasn’t tempted to hit busier roads to be faster. But without even having to try I kept stops to a minimum, maximizing my moving time. And in my head I was already optimizing my bike and equipment, shedding weight and decreasing aerodynamic drag for the TCRs to come (yes, I know: preposterous, very!).

So when it was time for lunch on Saturday afternoon I was quite happy to see that I only had a little under 2 hours of non-moving time in the almost 17 hours of racing – an unheard ratio for me! With 320 km down at early afternoon, legs and spirit feeling strong I sat down at a large hearty lunch and made plans for the rest of the day: Another 90 km of easy terrain along the Rhine would see me to Bingen. That would be a good 4 hours at current pace, so my plan was to get another good meal in there, stock up for the night and then keep pedaling into the sunset, seeing how long I could go before I was too tired to continue. It was going to be a warm night, so I wanted to give my bivvy setup a try, seeing if I could get a good – and restful – five or six hours of sleep out in the open. Maybe 450 or even 500km would be possible before hitting the hay??

Then I got the official e-mail that Frank Simons had died in a collision with a car and all plans became obsolete.

I did not know Frank personally and had not talked to him before the start. But I had sat with him in the race briefing only hours ago and he wore the same cap I did. And with that e-mail all the motivation, all the joy of riding suddenly left me, like a balloon hit with a needle. I rode on very slowly, not quite grasping what had happened. It was yet undecided what would happen with the race, but that did not really matter anyway – even if the race officials made the decision to continue with the race I would still have to make up my own mind about what to do. I talked to other racers I met, all of them shocked. Some spontaneously said that they would drop out right then and there, some said they would go on – in touring mode if the race got cancelled, but riding no matter what.

Everything seemed suspended: Riders rode side by side, talking about what had happened and what that meant. I stopped a lot more frequently, basically whenever I met someone else. General consensus was that the race would surely be canceled. Via the Facebook group a few riders organized a get together in Bingen, so I reserved a hotel and slowly made my way there. Most of that time I rode alongside Roger (cap #34), talking about what had happened. He wanted to go on, but said he couldn’t – he had been left lying unconsciously in the street after a hit and run with some broken ribs just weeks ago, and his little girl was already super scared for him. With a fatal crash now on top he needed to get off the road and back to his family.

What do I want?

That evening 10 of us met for dinner in Bingen, sitting outside until late, talking about Frank and the race and personal choices, all thoughts of racing put aside for some time. By now the official decision to continue with the race had been made (in the spirit of what Frank would have wanted), but even so three of us said they would drop out, one had in fact already done so. I had not yet come to a decision myself, so decided to sleep over it and get on the bike the next morning, trying to clear my head while pedaling. Usually that works quite well – in this case it did not.

My “race mode” was gone and I was in touring mode. Stopping for whatever reason became common. Taking a picture (another one), getting ice cream (another one), just a quick coke at the gas station (another one). Progress was slow and turning the pedals did nothing to clear my mind. Arriving late at check point 1 I talked again with other racers, a friend who had come down from Stuttgart and race director Juliana – but was still unable to come to any decision. So again I decided to have a proper sleep on it and see what the next day would bring.

I did not wake up with a made up mind. But after a long phone call with my girlfriend at the gates of Castle Lichtenstein I made the conscious call to try and get back into race mode for the next 150 kilometers, up to the town of Kempten. From there it would be either dead south into the Alps or take a left towards Munich, heading home.

To make a long story short: it didn’t work out. It took me almost 12 hours to ride those 150 kilometers. Yesterdays touring mode had turned into a leisurely bike ride. Even more pictures, more ice cream, more coke stops. And when I sat in yet another ice cream parlor in Kempten that evening I realized something: The decision was not whether or not I should quit. It was if I still had the heart and the commitment to stay in it and ride hard. Which the last two days had clearly shown I did not, and unfortunately I saw no signs of this changing. I did not want to ride the Transcontinental at a touring pace, that was something I was sure of. It was “pedal my heart out” or nothing. Once I had embraced that difficult truth the decision all of the sudden was very easy: After 2 days, 20 hours and 840 km on the road, cap #153 scratched from the race.

Looking back I am still certain that this was the right decision. Of course I am disappointed that I did not get to ride the TCR. And following the other racers’ dots made clear that I did miss most, if not all, of the adventure. Comparing my reason to scratch (“loss of motivation”) to what riders experienced further down the road illustrates that nicely: angry dogs, bears, getting run over by horses (!), struck by lightning (!!), battling a heat wave called “Lucifer”. And I only rode in countries I knew, my legs were still fresh and I had gotten plenty of sleep. I did not have to overcome any obstacles like broken wheels or pedals and the more “interesting” stretches of my route planning were all still to come.

But “broken motivation” will end your race more certainly than a broken bike.

The question of “why”

I have tried to understand if there is some deeper meaning in me quitting like this.

With Mike’s death in March going into TCR No. 5 the possibility of someone dying during the race was clear on my mind, so while of course not expected a situation like this should not have come as a surprise to anyone racing. And it wasn’t that I felt unsafe on the road all of the sudden – passing cars didn’t scare me and I was confident in (most of) my route choice, steering me away from heavy traffic. So it wasn’t fear or concern for my own safety that made me scratch. (I have of course been back on the bike since: no special road fear.)

Was my heart maybe not in it from the start, was the adrenalin and thrill of the start simply masking it and Frank’s death brought it to the surface? I very strongly doubt that. I enjoyed the first day too much and too consistently and was looking forward to the adventures to come. Heck, I was already planning my equipment for next year’s race!

So no, I do not know what this means. But I have stopped worrying – I think time will tell. When the time comes to apply for a spot in TCR No. 6 I will know if I want to give it another try….

A huge “Thank you!” to the “TCR family” and all the volunteers who made TCR No.5 possible and gave me this chance – even if I didn’t use it as fully as others. To Anna, Patricia, Russ, Juliana, and Tom – and everyone else involved, be it behind the scenes as dot watchers or check point volunteers. If I am not back on the bike I will be back amongst the volunteers in the years to come.